The Grand Portage Chippewa are descendants of the northern division of the tribe who migrated several centuries ago from the Atlantic Ocean.

Grand Portage is on the site of one of the earliest Ojibwa settlements in Minnesota. The protected bay and flat shoreline on Lake Superior made it an ideal gateway for the eastern headquarters and western supply depots of the fur trade. By 1731, French traders had built a cabin, blacksmith shop and warehouse. After 1760, the British took over, and by 1783 the British Northwest Company built a large complex of buildings which became known as Fort Charlotte. 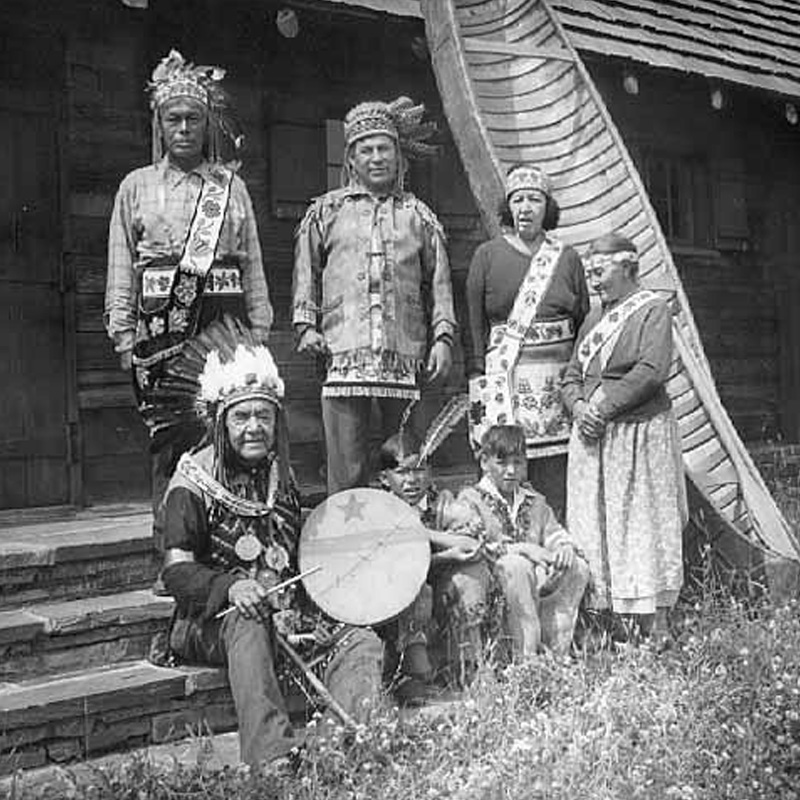 During this time about 150 Ojibwa families lived in Grand Portage and along the North Shore of Lake Superior. They were skilled trappers and provided traders with high quality pelts. They also taught the traders how to make and repair canoes and supplied them with essential food supplies such as deer, moose, wild rice and maple sugar.

After the War of 1812, the Americans took over the territories formerly held by the British. The Americans were less interested in trade and more interested in land. In the 1840's, the first cession by the Grand Portage Band occurred when Mingong island was turned over to the state of Michigan. In the Treaty of 1854, lands at the western tip of Lake Superior and the lands north to the Canadian border were ceded to the federal government. The Treaty set aside two small reservations for the Ojibwa, one of which was Grand Portage.

Permanent houses were built in Grand Portage village around 1856. Day schools were established and were well attended. Some families added farming to the traditional activities of hunting, fishing and plant gathering. As the century closed, village men found additional work at the Grand Marais boat dock, in lumber camps and in nearby Canadian mines.

The Dawes Act of 1887 and the Nelson Act of 1889 allowed speculators to grab up large portions of reservation land. With the passage of the Indian Reorganization Act of 1934 the Grand Portage Band voted to join the Minnesota Chippewa Tribe. By 1939, a new tribal government was in place at Grand Portage. Under the leadership of tribal chairman, Alton Bramer, the tribe bought back some of the land that had been taken by the speculators.

During the Great Depression, Grand Portage men worked in the Indian Division of the Civilian Conservation Corps, on archaeology excavation projects around the old Northwest company stockade and in logging camps at Nett Lake. The schoolhouse and community center became a permanent structure of the village during the 1930’s.

During the 1960's, the installation of a new telephone system and the construction of Highway 61 through the reservation improved communication and accessibility. The Reservation Business Committee negotiated with the Radisson Hotel Corporation in the 1970’s to build a Radisson at Grand Portage. This lodge is now a tribal enterprise called Grand Portage Lodge & Casino.